Mandalay is the cultural capital of Myanmar with own charms and great wonders. Once taking Myanmar tours, you will get the chance to wallow in the splendid nature dotted with stupas extending to the horizon as well as the incredible hospitality of the locals. Here are our recommendations for the best attractions in Mandalay & the best things to do there.

Top 10 Most Famous Places to Visit in Mandalay

Situated in the southern region of Mandalay, Mahamuni Pagoda is the most famous attraction in Mandalay where one of the most famous Buddhist statues in the world is placed. This statue is a favorite stop-off along the journey of pilgrims. There is a crown of diamonds, rubies, and sapphires on the head of the radiant Buddha likeness which makes an august and lofty sight.
With a height of 3.82 meters and covered by a gold-colored layer, it is admired by both tourists and local followers. Every morning, the monks carefully washed the statue to show respect and reverence. 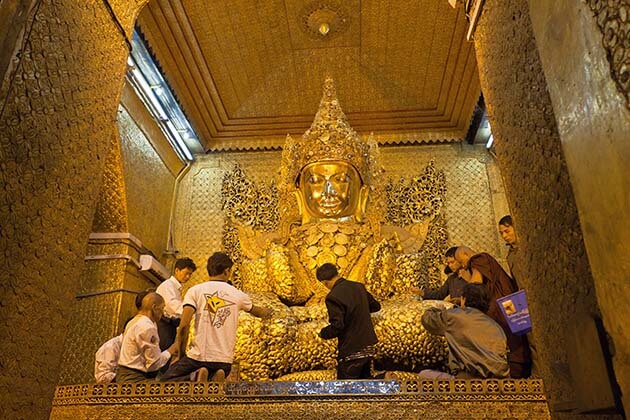 Shwenandaw means ‘Golden Palace’ since it was once a part of the Royal Palace in the past. Although it is not plated in gold anymore, the delicate carvings in 19th-century architecture still remain which told the stories about the history and traditional values of the time.
When walking inside the monastery, you will see that all around the walls and roofs are shapes or designs etched into the beautiful teak. In the main shrine, there is a statue of Buddha which is covered by a golden layer. 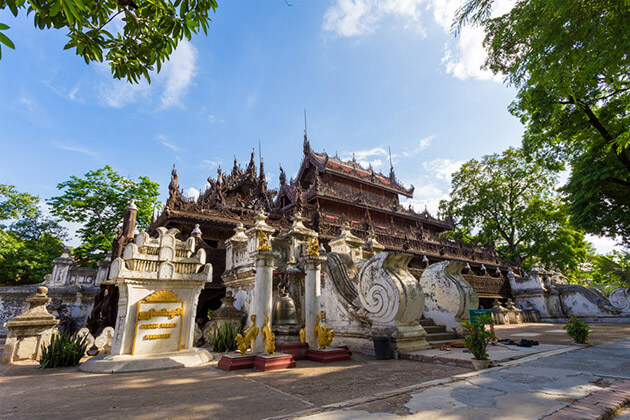 No Mandalay trip completed without visiting Kuthodaw Pagoda. Kuthodaw was built in 1857 and totally plated in gold; however, the real highlight, real treasure which makes it become one of the best places to visit in Mandalay is placed in 730 marble structures that embrace the ‘book’ holding the whole of the Buddhist canon.
When wandering through these rows of stupas, you will realize that each tablet contains up to nearly 100 lines. In 1968, when the construction was finished, the words carved on each stone were covered in gold; however, the gold was stolen several decades later and the tablets still remain up to now and are recognized as the world’s largest book. 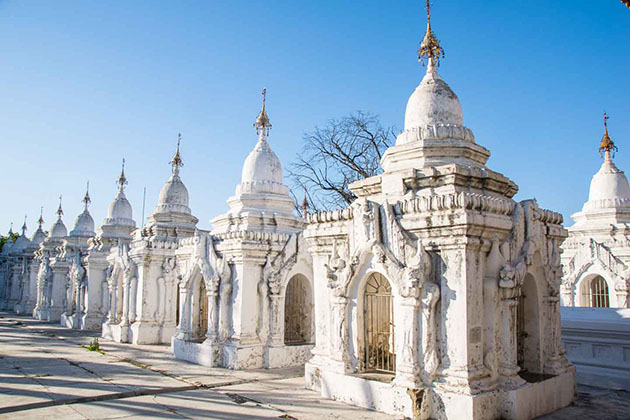 If you wonder where is the best place to contemplate the stunning sunset and the whole city from above, Mandalay Hill holds the first place to visit in Mandalay on your trip. It worth a climb up to the hill’s top as you can see the sweeping view of the town as well as the sights along the way including a giant standing-Buddha and a statue of Sanda Muhki.
When you reach the top of the hill, you will see two temples which are Sandamuni and Sutaungpyei Pagodas where the pilgrims often show up and make offerings and pray. You also easily catch the monks standing along with the pagoda and talking with foreigners to practice their English. 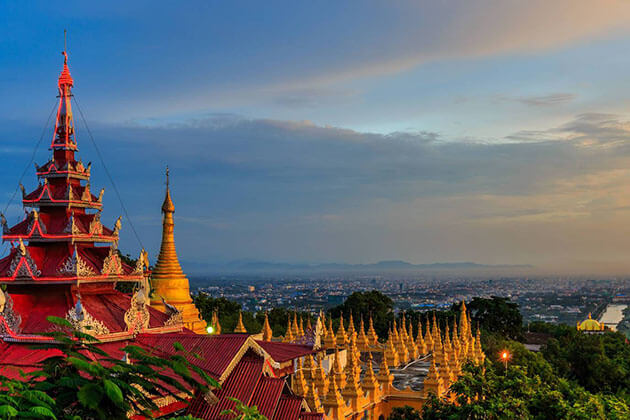 Mandalay Palace nestled inside a walled perimeter and is surrounded by a beautiful fence. Although the original palace was demolished during World War II, this is the home of King Mindon and his family in the late 19th century.
You can take a walk around the grounds including the shady, archaic gardens, playgrounds and swimming pools. If you are the one who concerns about its military aspects, you can take a look at security ports for soldiers, horses, and archers.
You will easily catch the sights of sheds for royal animals, audience halls, and a monastery. Royal clothing is shown up in an exhibition and you can put them on to take the memorable photos. 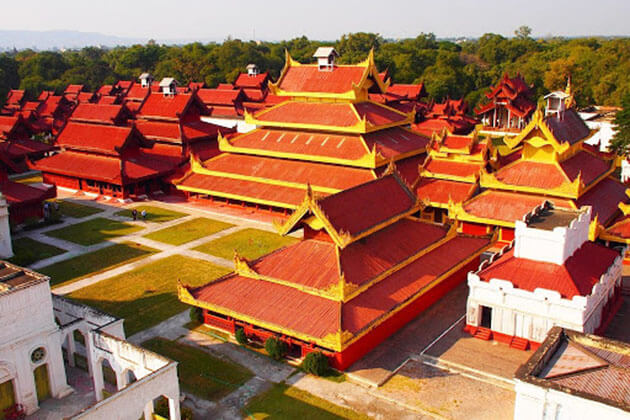 Another best place to visit in Mandalay is U-Bein Bridge which is the longest teakwood bridge in the world with a length of 1.200m. The water level changes depending on the season but the lake will always give you a sense of peace and tranquility.
If you come here early in the morning, you might see local monks and villagers beginning their day with a journey to the opposite side of the bridge. On the bridge, you can buy some handicrafts and other souvenirs from the hawkers. At sunset, the lake turns into orange color etching both the bridge and pedestrians against a blear background. 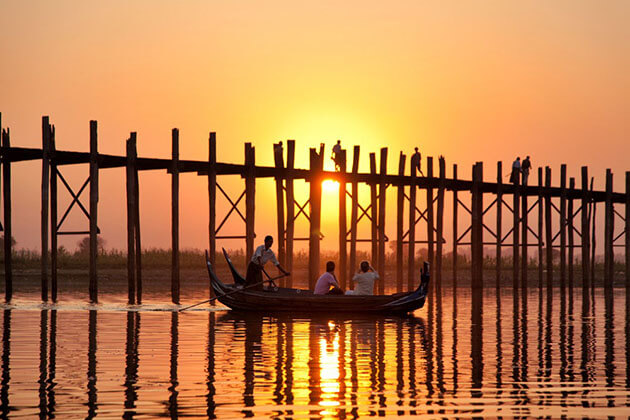 7. The Ancient City of Inwa

You can get the chance to go back in time on a horse-drawn carriage to this ancient city. Upon Inwa, you may feel like being lost in a time machine back to the history of a city which was once destroyed by invasions and earthquakes and rebuilt later.
This is the ancient capital of Myanmar and its oldest buildings were built in the 14th century but each refurbishment brought a new style for the architecture. The huge fort walls standing ever-vigilant around the old edifices are the witness of the time-honored past.
You can also see the Maha Aung Mye Bonzan monastery here which is not alike others since it was made of brick. The stone chinthes are places along the entrance and its ornamentation is one of a kind which makes it become one of the best places to visit when being in Mandalay tours. 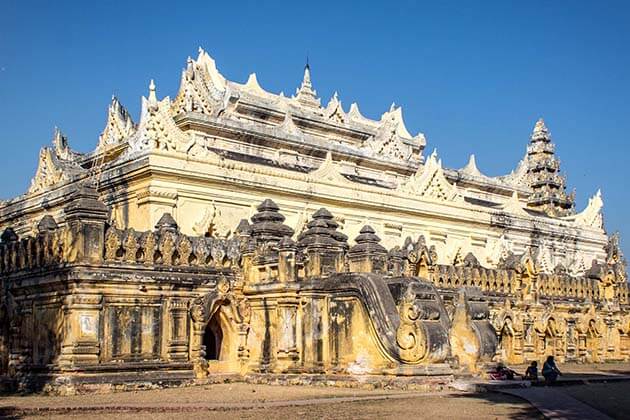 Located on lush, evergreen hills opposite Inwa which has a large number of monasteries and pagodas ranging from gold to silver and pure white. Sagaing is a good place to visit in Mandalay to catch the best views over their golden spires.
There is an annual festival be held in November which attracts both the locals and tourists that makes this place to be one of the best famous places Mandalay; there will be many activities taken place on this occasion including marionette shows and other cultural delights.
Soon U Ponya Shin Pagoda was built in the 14th century and is situated here as well. Once it was the place where hold the Buddhist relics and is said to grant 14 wishes of followers. 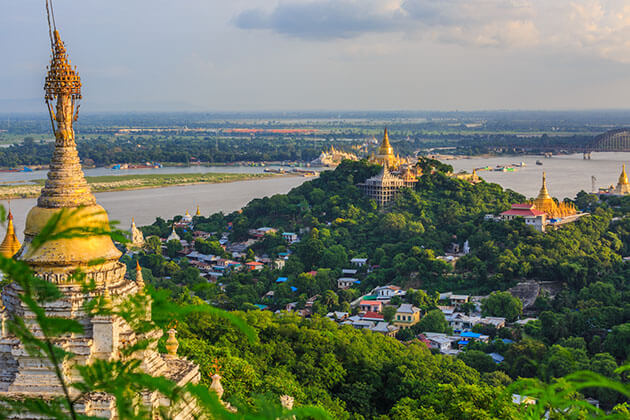 One of the best things to see in Mandalay – Mingun Temple is situated on the Ayeyarwady River with a width of 150 meters. This temple is truly a wonder giving the amazing sweeping views of the whole countryside.
What makes this structure different from others is that it has never been completed. An astrologer once told that King Bodawpaya would die of its completion; as a result, the construction was delayed and abandoned up to now. If it had been completed, the stupa on the behemoth would have been the largest one in the world.
Presently, this temple has a model placed nearby and it holds the Mingun Bell. Previously, the bell was entrusted for the temple and now it is believed to be the largest unspoiled bell in the world.

Not very far from Mingun Pahtodawgyi located Hsinbyume Temple – an elegant temple which is a not-to-miss attraction in Mandalay. The magnificent temple with 7 terraces stands for 7 oceans on earth and white color stands for the pure love of the king for his wife – Queen Hsinbyume who unfortunately lost her life when giving childbirth. 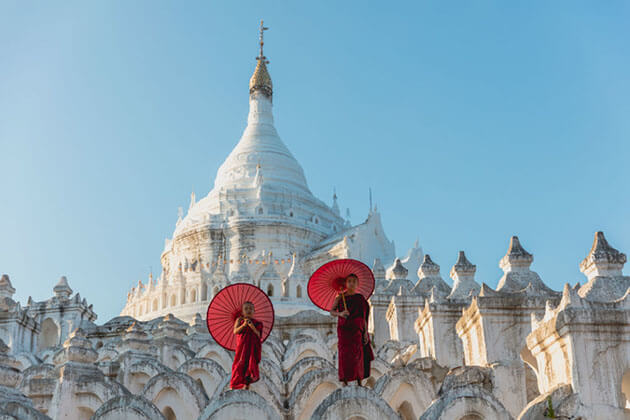 Amazing Things To Do in Mandalay

Mandalay is recognized as a World Cultural Heritage Site with a large number of monasteries and pagodas which witness the history of Buddhism and feudal dynasties. Admiring Mandalay attractions, you will be overwhelmed and impressed by its own charms and distinctive glamour. We provided you with the best things to do in Mandalay to renders your trip perfect and memorable in the following.

Situated at the foot of Mandalay Hill, Kuthodaw Pagoda is one of the best highlights of the city. It is well-known for the home of the largest book in the world, so reading 729 amazing marble flagstones with the Buddhist teachings carved on is one of the best things to do in Mandalay. The pagoda is surrounded by hundreds of holy places which create a strange serenity and sacredness. Moreover, located nearby, there is another ancient pagoda which is called Mahamuni Pagoda which offers you a great opportunity to learn and experience more about Burmese culture when being in Mandalay tours.

If you want to contemplate the panoramic beauty of the whole city and surrounding areas from above or enjoy the amazing views of the sunset, Mandalay Hill is a good place to visit that you should not miss.
With the height of 236m and topped by a big gold-gilded pagoda, the Hill has its own peace and charm. You can walk or take a taxi to reach the top and if you are in no rush, walking is strongly recommended since you can see the breathtaking landscapes, enjoy the fun of hiking as well as have the time to observe a Buddhist statue and some little pagodas.
Recommended time to visit: 4 to 5 pm in the afternoon

Feel the Glory of Mandalay Palace

One of the best things to do in Mandalay that you should not miss is to visit Mandalay Palace. It is the last palace of the last monarchy in Myanmar and surrounded by a moat. The water in the lake surrounding the palace is so clear and pure, it reflects the palace together with the surrounding landscape and blue sky above, all of which create a wonderful watercolor painting. When contemplating the palace, you may feel that the time is standing still and everything stops for a while.
Behind the archaic city walls, there are dozens of temples line up in rows which are made of wood and designed in traditional Burmese style with two main colors: gold and red. Additionally, if you want to catch the view of the whole palace, you can climb up the top of a tower there.

U Bein Bridge, which was built in 1851, is the oldest and longest teakwood bridge in the world with a length of 1.200m. There were 1086 solid teak pillars used to make this bridge and it crosses over the Taungthaman Lake and offers the main walkway for local people.
In the afternoon, when the sun is going down, you can take a seat and relax at a local bar or take a promenade along the lakeside to learn more about the lives of local people and enjoy the stunning sunset.

Shwenandaw Monastery is the staple part of the royal palace which still remains until today. It was built in 1880 with the architecture of traditional Burmese and is famous for the teak carving on the walls, doors, and roof which illustrate Buddhist symbols and legends. Coming to the monastery, you can take your time and contemplate the delicate carving and ancient design, from that, having your admiration for the skillful and artistic hands of the old Burmese in the past. Moreover, you can get the chance to know more about the lives of the monks in the monastery as they are meditating and chanting.

Ride a Horse around Bargaya Monastery

Although Bargaya Monastery shared a lot in common with Shwenandaw with the same kind of structure and subtle carvings, it still worth a place in the top best things to do in Mandalay. It is situated on Inwa Island and not really near the downtown, the beautiful sights surrounding Bargaya will make you feel comfortable and pleasant. If you like outdoor activities, you can take a horse ride around the island to take your time and wallow in nature as well as the archaic brick temples. 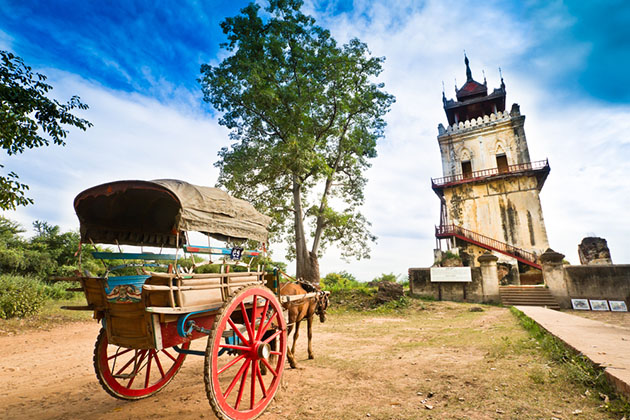 Learn More about The Lives of Monks in Maha Gandayon Monastery

Mandalay is a shrine of temples and pagodas that is the reason why the holy places have always appeared on the must-go destination in Mandalay. One of them that we cannot ignore is Maha Gandayon Monastery which is the largest monastery in Myanmar with 2.000 novice monks. This is a great chance for you to gain more knowledge about the daily lives of them as well as Buddhist culture.