Myanmar, the official name for the Southeast Asian nation more commonly known as Burma, is beginning to open up and friendly towards foreign travelers in modern times. Traveling Myanmar offers tourists countless significant places of interest, some of which are Buddhist temples and pristine beaches. For that reason, you should not miss the 10 best tourist attractions below as one of your Myanmar Tour’s essential guide.

Yangon – City of the Permanent Charm

The Shwedagon Pagoda is one of the top tourist attractions in Yangon. This gigantic gold structure in Yangon is as high as 99 meters with its appearance covered in about 60 tons of gold. If you look up at the top of the stupa, you can see a 76-carat diamond as well as over 7,000 smaller diamonds throughout the complex. Inside the Shwedagon, there are smaller temples and pavilions dedicated to various Buddhist gods. Please note that you need to remove your shoes and you may need to bring a plastic bag with you to carry your footwear.

The reclining Buddha (Chauk-Htat-Gyi Buddha Temple) is a large image of Buddha in Yangon that spans a distance of 16 meters. Locals come here to make offerings and worship. When you visit, you will see different temples corresponding to the days of the astrological week. People make offerings to the temple on the day of their birth.

Another popular attraction is the long-standing Bogyoke Aung San Museum. Anyone with a modern political background will know Aung San Suu Kyi, a former Nobel Peace Prize winner. She was a prominent figure in Myanmar’s development and her father, General Aung San, helped to gain Burmese independence from the British. The museum was home to the Aung San Suu Kyi family and her father before his assassination. A trip here is one of Myanmar’s best attractions for modern history lovers. 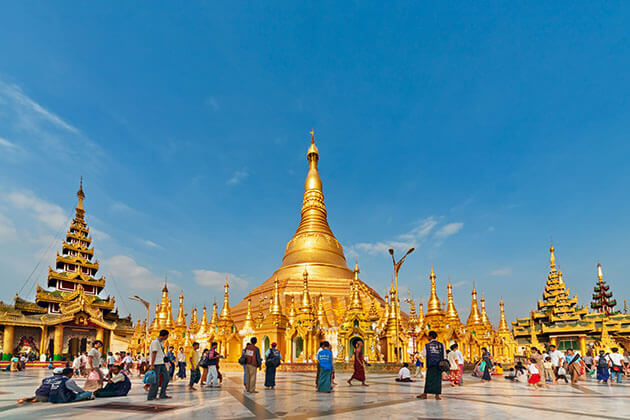 Being one of the best Myanmar tourist spots and one of the most visited places throughout the country, this is undoubtedly the greatest archaeological site on earth that you should never miss when visiting Burma.

In early civilization, no less than 10,000 temples, monasteries, stupas, and pagodas were erected within the relatively small area of Bagan. Nowadays, there are about 3000 of them remaining, one close to each other, so you can choose among a wide range of transportation such as bicycle, on foot, buses, tuk-tuk or even a hot air balloon to enjoy a panoramic view of Bagan from above, which is surely an unforgettable experience. 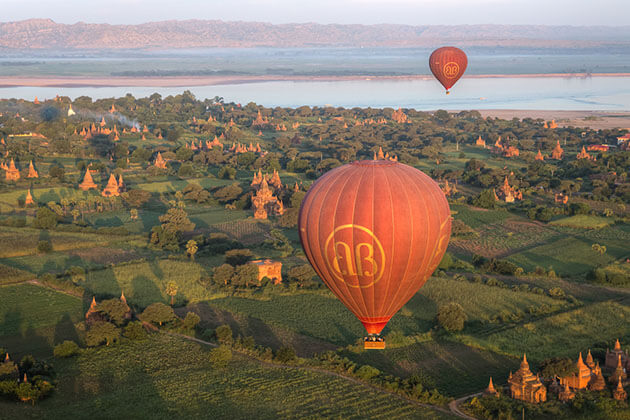 Along with Bagan, Mandalay is one of the main tourist attractions in Myanmar. Located not far from Bagan (about 30-minute flight from Bagan), Mandalay is another must-visit attraction in Myanmar. This land was once the capital of ancient Myanmar and now is a bustling city that wouldn’t fail to captivate your soul with the majestic beauty of the architectural wonders.
Kuthodaw, Mahamuni Buddha image, Shwenandaw, and the sophisticated architecture of Mandalay Hill are the major tourist places of Mandalay. Especially, the most remarkable location in this city is U Bein Bridge, Amarapura, which is known as the longest teak wooden bridge. 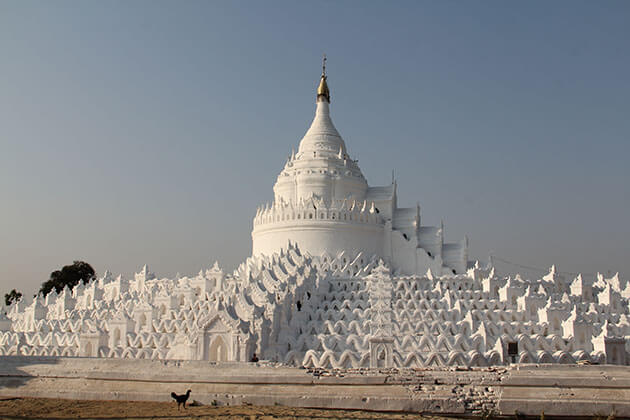 Large and peaceful Inle Lake is one of the top tourist attractions in Myanmar. You can come here to explore the surrounding villages supported on the stilted houses reaching out to the water. Various activities include sailing around the floating market and visiting nearby temples and monasteries. You can also see local Intha, who uses a unique style of their rowing with just one leg, for a more cultural experience. 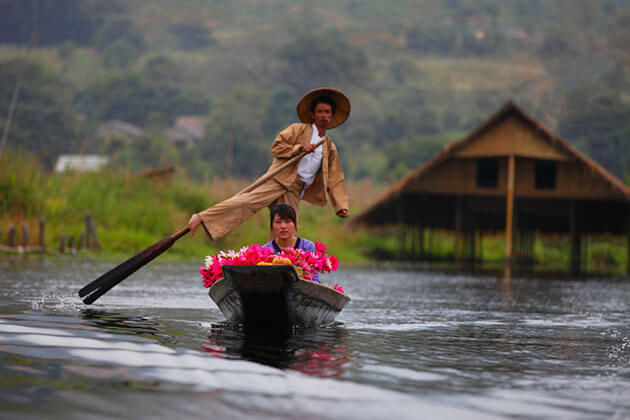 The Golden Rock, or Kyaiktiyo Pagoda, is a stunning sight: a temple (zedi) sits atop a large rock that appears as if it is about to fall off the edge of a cliff. Both are covered with gold. Locals believe that the rock, located 1,100 meters (3,600 feet) above sea level, is held in place through a miracle of Buddha. The temple festival (also known as the Nine Thousand Light Festival) takes place at Kyaiktiyo Mountain at the end of the year and you will receive special food provided by locals and watch the event. See the mountain illuminated by candles after dark. 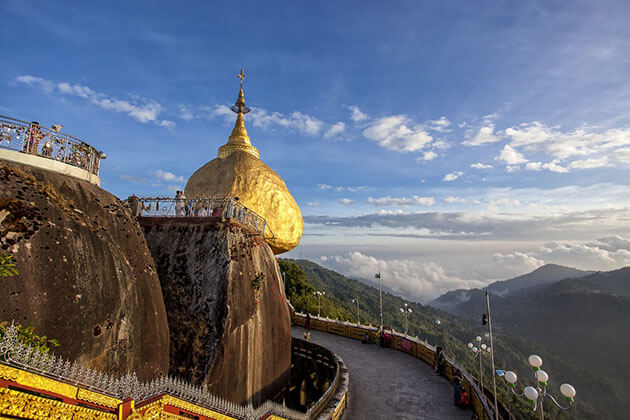 Ngapali – A Haven in Southeast Asia

Ngapali is one of the most beautiful tropical beaches on the Bay of Bengal suitable for recreational tourism in Myanmar. Located on the coast of the Bay of Bengal in Rakhine state, the main feature of this destination is an endless stretch of white sand and the palm tree coast, with several resorts next to traditional fishing villages.

The delicious seafood which is highly appreciated by visitors is another thing that makes Ngapali a favorite destination for Myanmar tourism. You should be absolutely delighted when trying out great local food like fried squid, lobster, snapper, barracuda, king shrimp, and fish curry. 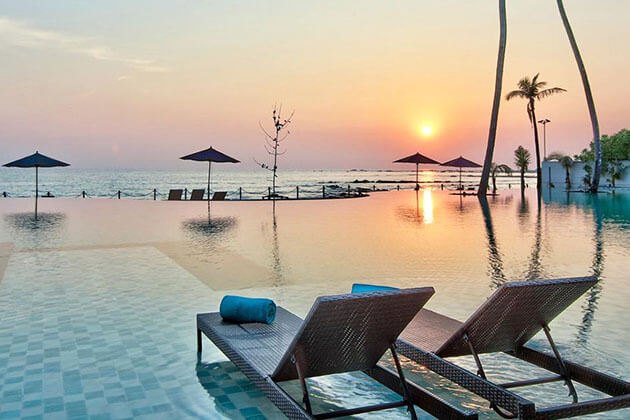 Pyin Oo Lwin – a paradise to escape the Mandalay heat

After the construction of the railway from Mandalay, Pyin Oo Lwin became the place for a summer escape of the British colonial government, the role it held until the end of British rule in 1948. Pyin Oo Lwin’s botanical gardens are strangely beautiful and the town itself retains some typical examples of 19th-century rural houses, some of which are now hotels. Although currently affected by a number of recently developed builders, Pyin Oo Lwin’s colonial heritage still holds the key to the charm of the town and the surrounding area includes some majestic waterfalls.

To this day, colorful wooden horse carriages are one of the main forms of transportation around town.

And you shouldn’t miss the Pyin Oo Lwin flower festival, which takes place in the December Garden at the end of the year and extends to the next year, with an aim to encourage people to conserve the environment, promote local tourism, and give the public a sense of relaxation. 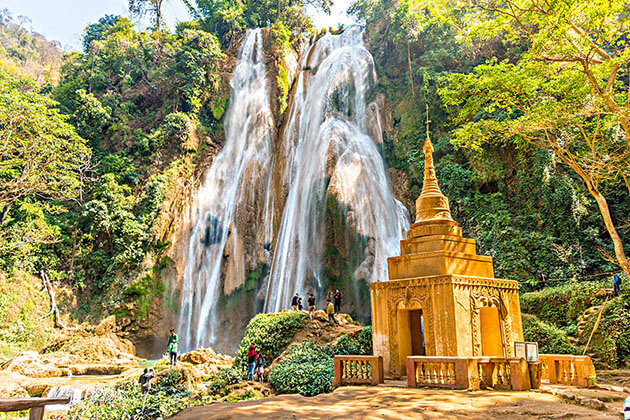 Kengtung Tong, the mesmerizing capital of the Golden Triangle area, is a beautiful attraction in Myanmar located in the far east of Shan State where you are immensely intrigued by the allure of the rolling hills and the remote villages. The town is home to diverse Burmese ethnic tribes so the town offers you an opportunity to indulge in the cultural diversity of different groups. It is quite secluded and remains a vague location with many travelers. 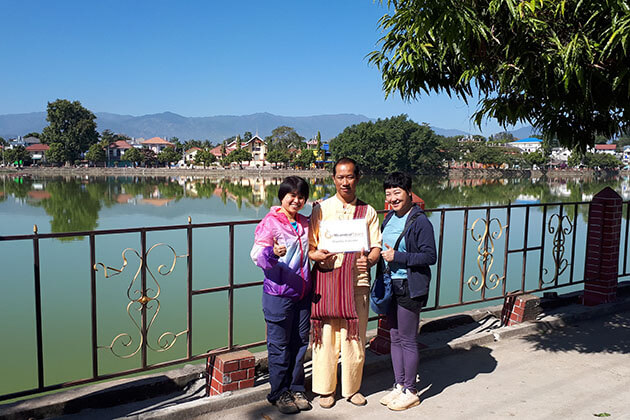 Sited about 270 km from Yangon, the magnificent townscape of Hpa-An is an attraction not to be missed when traveling to Myanmar. Here, visitors can be mesmerized by the morning scene of the locals on the narrow paths leading to the beautiful lake where you can watch the beautiful sunrise with the reflection of Zwegabin Mountain in the water. I can not describe the greatness of it when wandering around the bustling morning markets, observing the daily life of the people and getting to know the local monks. For adventure lovers, don’t miss this opportunity to climb the top of Zwegabin Mountain to admire the incredible views of the town. The strange Kyauk Kalap Monastery is located on top of a rock in a small reservoir that will surely steal your heart. 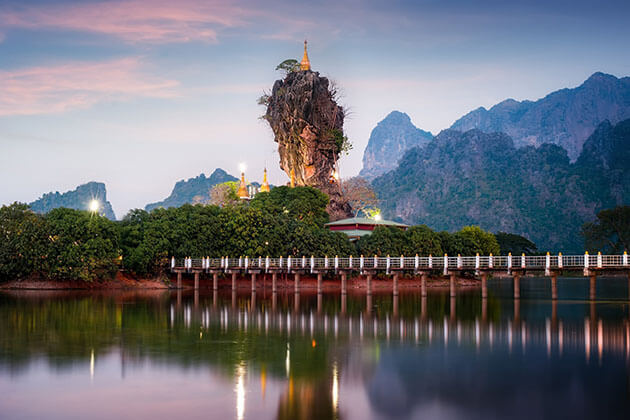 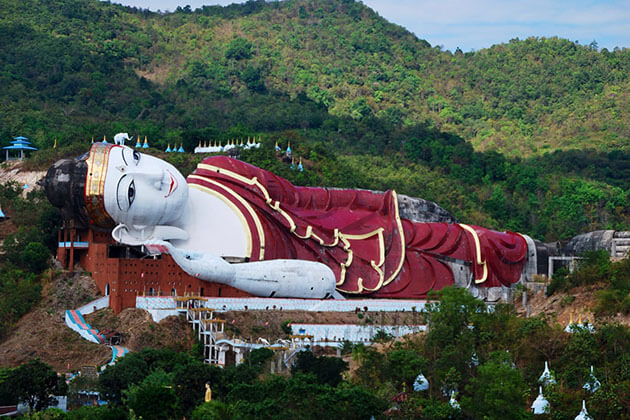 Located not far from Inle Lake, Pindaya is a destination worth visiting in Myanmar. With enchanting scenery and relaxed pace of life, visiting Pindaya from a Myanmar tour will leave a strange aftertaste of Myanmar tourism. It is home to an impressive Pindaya limestone cave, tea plantations, and a traditional village. 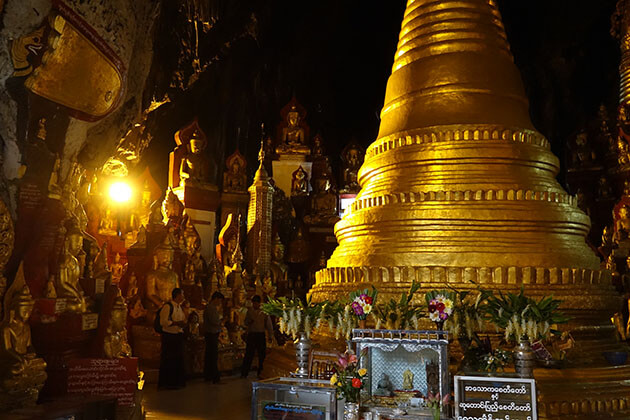 About 80 kilometers Northeast of Yangon, Bago is one of the famous attractions in Myanmar which appears to be a land of myth and legend. Shwemawdaw Paya Pagoda has its name, Great Golden God, because of the glittering gold that its shell can be seen for miles around. At almost 114 meters (375 feet) tall, this is the tallest pagoda in Myanmar. It is especially important for Buddhism because it contains some relics belonging to Buddha. Located in Bago, this 1,000-year-old complex is ornate with smaller temples also covered with gold, statues, and temples. 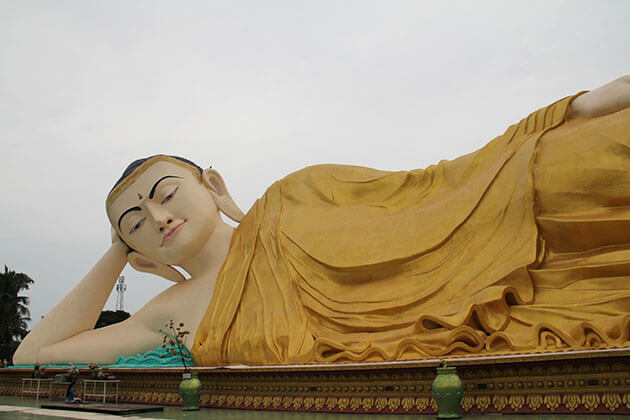 Along with Shwemawdaw, a number of other temples also contributed to the famous abundance of Bago religion. In addition, tourists can also participate in morning market activities near the river and cycle around the Stupas and Buddhas.

The Modern Capital of Myanmar – Naypyidaw

Naypyidaw is not exactly one of the must-see Myanmar attractions, but it should be on your list of places to see if you have time. The capital is modern and very different from any other major city in the world. The attractions include the giant parliament building, the zoo, and the empty 20-lane highway. 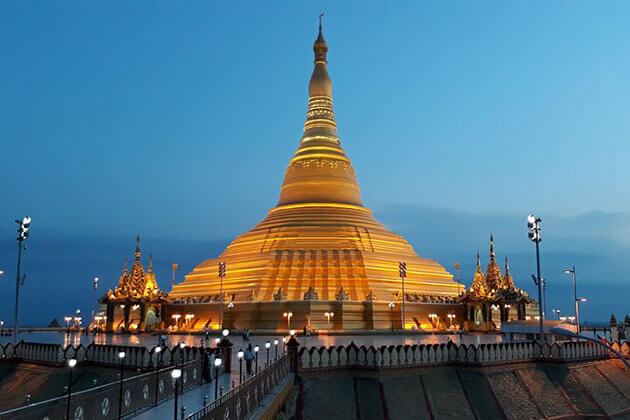