Mandalay, as the center of Myanmar culture, was outstanding in the past, it holds the stage now, and it will continue to be a place of pride in the future. It is situated about 600 kilometers north of Yangon on the Ayeyarwaddy River, is, with about half a Million inhabitants Myanmar’s second-largest city. Hopping on Myanmar tours, you will definitely fall in love with this charming city. Let find out some interesting fact about Mandalay history in this article.

The History of Mandalay Region

Mandalay is the historical old capital, a capital of Myanmar culture, Buddhist Sasana and Myanmar traditional arts and crafts, with the life span of one hundred and forty-two years, a city which abounds in historical sites, cultural memorials and Buddhist edifices. Accordingly, it is the richest historical landmark next to Bagan.

Despite the wonderful sound of its name, inviting associations to an archaic fairy tale kingdom, Mandalay is neither very old nor particularly beautiful. But Mandalay was the capital of the last, independent Burmese kingdom, which in 1886 was finally conquered by British colonial forces.
The town had been founded only 29 years earlier in 1857 by King Mindon, making it the capital of an independent kingdom for less than 30 years. In 1857 Mandalay was set up in an empty area, because, according to an ancient prophecy, in that exact place a town would come into existence on the occasion of the 2,400th jubilee of Buddhism.

The city was named after the Mandalay Hill, which is situated at the northeast corner of the present city. The hill has for long been a holy mount and it is believed that Lord Buddha prophesied that a great city, a metropolis of Buddhism, would be founded at its foot. It was King Mindon who fulfilled the prophecy.

King Mindon decided to fulfill the prophecy and during his reign in the Kingdom of Amarapura, he issued a royal order on 13 January, A.D 1857 to establish a new kingdom. The Ceremony of Ascending the Throne was celebrated in July 1858. The royal city and the kingdom were demarcated. The whole royal city was called Lay Kyun Aung Mye (“Victorious Land over the Four Islands”) and the royal palace, the Mya Nan San Kyaw (“The Royal Emerald Palace”). The kingdom was called the Kingdom of Yadanabon, along with another name Ratanapura, which mean “The Bejeweled Site “. Later it was called Mandalay after the Mandalay Hill, 2.5km far to the northeast of the royal palace, and today the name still exists. The name “Mandalay” is a derivative of the Pali word “Mandala”, which means “a plains land” and also that of the Pali word ” Mandare “, which means ” an auspicious land “. 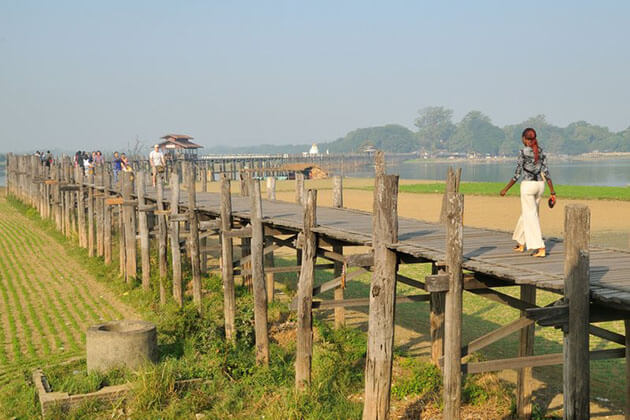 At that time a transfer of the capital not only meant leaving an old town and erecting a new town in a different place. As all secular buildings of that time, including the royal palaces, were built from wood, a transfer of the capital meant the complete dismantling of the houses of the old settlement, which then were loaded on carts and the backs of elephants to be reconstructed at the place chosen for the new town.
But in 1782 the town was packed up and moved about 8 kilometers to the Northeast, to the aforementioned Amaraputra. In 1823 the entire capital was dismantled again and rebuilt 8 kilometers Southwest in Ava. But in 1838 Ava was damaged by an earthquake and was therefore in 1841 packed up again and once more transferred to Amarapura. But this was not of duration either, as only 16 years later the entire town was moved again this time 12 kilometers to the Northeast to the present Mandalay.

Mandalay Palace – The Resident of the Last Burmese Royal

The rhyming couplet easy to memorize the year of building the royal city is “Okkyit-Kyaw Aye / Mandalay “or” Aung Kyaw Chan Aye / Mandalay” (i.e, M.E 1221). The city’s layout of the construction is the same at that of the earlier Kingdom of Amarapura, and from the bird’s eye view, it has the structure of geographical squares and rectangular shapes, with streets and roads crossing one another at right angles. There are four parts dividing the city, namely, Ashe-pyin (East Part), Anok-pyin (west Part), Taung-pyin (southern part) and Myauk-pyin (Northern Part), with 54 plots.
With the Ground-breaking ceremony, King Mindon laid the foundation of Mandalay on the 6th waning day of Kason, M.E 1221, (A.D 1857). The King simultaneously laid the foundations of seven edifices: the royal city with the battlemented walls, the moat surrounding it, the Maha Lawka Marazein Stupa, the higher ordination hall named the Pahtan-haw Shwe Thein, the Atumashi (the Incomparable) monastery, the Thudhama Zayats or public houses for preaching the Doctrine, and the library for the Buddhist scriptures. 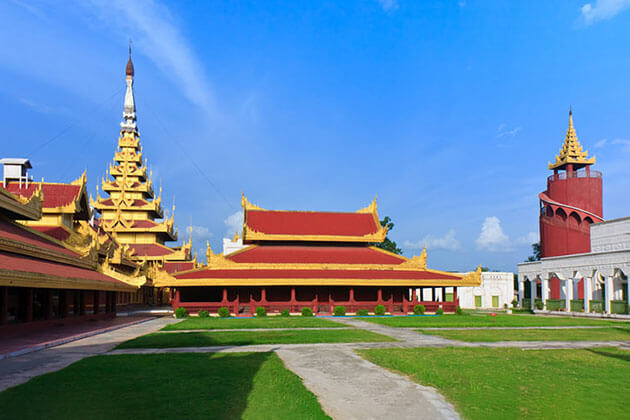 At the time of building, the royal moat was 68.58m wide and 3.35m deep and was fed with water from the Yadana Nadi, now called the Ye Ni Canal. In 1995 the moat was dug anew and the banks were laid neatly and firmly with rocks. There existed 20 gardens, a huge earthen wall, and 57 doors palace. There existed 5 bridges spanning over the moat and 12 bridges. At present, there are four spanning bridges, namely the U-hteik Bridge to the east the Kyaw Moe Bridge to the south, the Kye Mon Bridge to the west and the Lay Thein Bridge to the north.
When King Mindon passed away, his son King Thibaw ascended the throne, and in M.E 1247, Myanmar fell under the British colony. It was the old capital ruled by two successive kings the one where the last of Myanmar’s monarchs reigned. 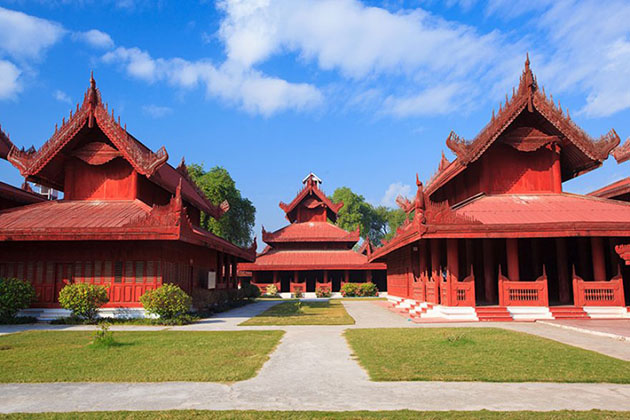 After the British had conquered Mandalay in 1886 they turned the royal palaces of Mandalay into their military headquarters and christened the complex Fort Dufferin.

During World War II the Japanese installed a military camp in the same place, which then was bombed by the allies until nothing was left of the ancient palace buildings.

Mandalay today is a striking phenomenon composed of modern and classic images with the ancient cultural beauty of the royal palace and the moat surrounding it, and the natural impressionistic beauty of the Mandalay Hill harmoniously added with new architectural phonography of modern houses and brick buildings.

The former palace ground is known by the name of Fort Mandalay. Of the ancient palaces, a few concrete replicas have been built and further reconstructions are being conducted.